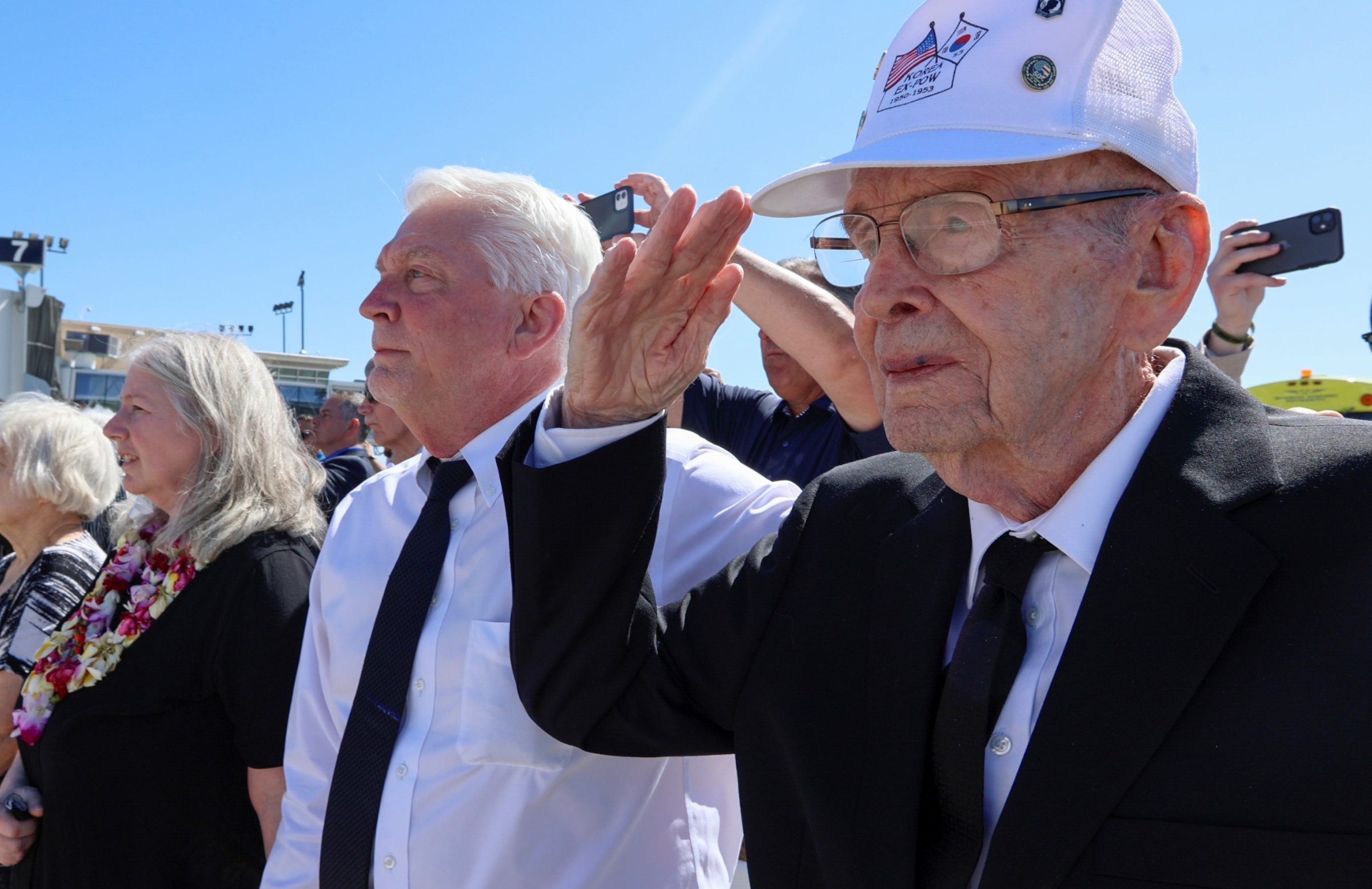 The Homecoming of Father Kapaun and the Advent of Christ

The buzz on the airplane when we landed was palpable.  It’s not often that you know there are a few dozen people awaiting your arrival on the tarmac, not to mention a water cannon salute before you arrive at the gate.  Thankfully I was seated on the right side of the plane to have a view, and as we rounded the taxiway and approached the ramp, my eyes began scanning the crowd, first for my wife and daughter, but next for someone I knew would be seated in the front row.

Sure enough, I saw a frail but determined gentleman of 90 years slowly stand and salute as the plane pulled in.  “That’s one of Father Kapaun’s fellow POWs” I whispered to the man sitting next to me before the next words got caught in my throat.  Here stood Paul Roach, who travelled from New Mexico to be reunited briefly with a man whose life impacted him greatly.  He and the few Prisoners of War who are still alive waited over 70 years for this day to come.  I knew the salute was coming, but it still brought tears to my eyes.

After Father Kapaun was welcomed off the plane, he was placed in a hearse and escorted to his hometown of Pilsen, Kansas, a community that has waited faithfully all these years and never let his story fade from our memories.  I think only someone who grew up in the community could fully appreciate the moment.  I’m sure if you attended one of the homecoming events you have your own powerful memory of anticipation and coming- and if not, hopefully you’ve all seen footage or pictures of it.

The word advent, of course, means coming, and our experiences with Father Kapaun’s homecoming this fall give new perspective to what the Church holds up for us to ponder each year during the season of Advent.  The months of excitement, anticipation and planning for Father Kapaun’s return home are a good model of the excitement, anticipation and preparations that should go into welcoming Christ into our hearts at Christmas.

In one of his early homilies, Father Kapaun focuses on a line from the prophet Isaiah, quoted in the Gospel of Mark:  “Prepare the way of the Lord, make straight his Paths.”  The people of the ancient east “prepared for the coming of their king by levelling hills, straightening roads, beautifying the route of his journey.”  This is what we tried to do with Father Kapaun.

But “Christ the King is coming into the kingdom of our soul.  We prepare for this coming by prayer, almsgiving and penance.  Thus we straighten our lives, we level the hills of sin and attachment which have risen in the past and which mar the original beauty of our soul received at Baptism.”

All of us here at Father Kapaun’s Cause for Sainthood want to wish you a blessed Advent season.  If Father Kapaun’s homecoming and presence have taught us anything, it’s that there is a greater coming that awaits us after this earthly journey.  There is Someone far greater whom we await, whom we welcome into our hearts a little more each Christmas.

May Father Kapaun pray for you and your families and help you prepare for the coming of our King.