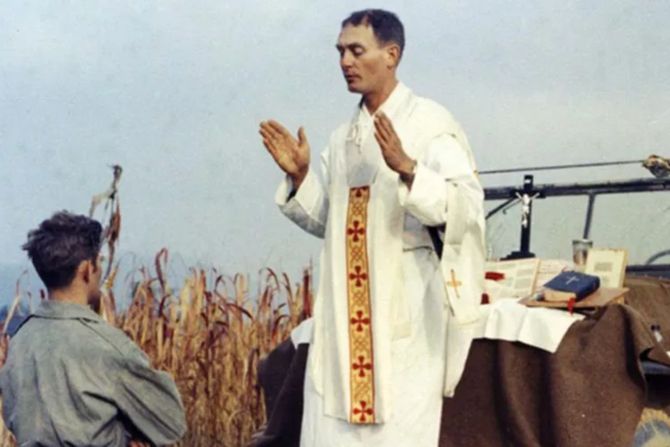 The remains of Servant of God Father Emil Kapaun, army chaplain and hero of the Korean War, will return to Kansas after his body was identified last month in Hawaii, 70 years after his death.

Kapaun’s nephew Ray wrote on Facebook April 10 that the family had accepted an offer from the Diocese of Wichita to “temporarily have Father’s remains placed in a crypt” at the Cathedral of the Immaculate Conception. Kapaun’s sainthood cause is open.

“We felt that this would not only provide a secure place, but also provide a safe and suitable place for all to come to visit and venerate his remains,” Ray Kapaun wrote.

Father Kapaun was a chaplain during the Second World War and became known for his service in the Korean War with the U.S. Army’s Eighth Cavalry regiment. After he was taken prisoner, he served and ministered to other soldiers in a prison camp, where he died May 23, 1951, at age 35.

Kapaun was born and raised in Pilsen, a tiny rural community about an hour north of Wichita.

Scott Carter, coordinator of Kapaun’s sainthood cause, told the Hillsboro Star-Journal that Kapaun’s interment at the Cathedral is likely temporary; should he be named a saint in the future, he will likely be moved to a dedicated shrine.

He said the family considered Pilsen for the burial site, but decided on Wichita for the time being for security reasons.

Still, Carter said the family will likely bring Kapaun’s remains to Pilsen to give the community an opportunity to honor the priest before he is buried in Wichita. The timeline for Kapaun’s arrival in Kansas has not yet been set.

The U.S. Defense POW/MIA Accounting Agency determined that the priest’s remains were among a group of some 900 unidentified soldiers buried at the National Cemetery of the Pacific in Hawaii, the Wichita diocese said March 4. Many soldiers’ remains had been moved there from North Korea in the 1950s and again in the 1990s.

Father John Hotze, who serves as the episcopal delegate for Kapaun’s beatification cause, told CNA last month that the news of the identification of the priest’s remains was “easily one of the last things I expected.”

“We’ve always hoped that his remains would be found. It is something that has been on the back burner for everybody for so long. It is great news,” he said.

Born in 1916, Kapaun was ordained a priest in 1940 and began ministry as a parish priest in his hometown. He served in India and Burma during World War II, and later continued his education in Washington D.C. before deploying to Korea.

During the Battle of Unsan in November 1950, Kapaun worked tirelessly to comfort the suffering and retrieve the wounded from the battlefield. One of the soldiers he retrieved was a wounded Chinese soldier, who helped him negotiate a surrender after he was surrounded by enemy troops. Kapaun was taken captive as a prisoner of war.

The soldiers at the camp were severely mistreated and suffered from malnourishment, dysentery, and a lack of warm clothing to counter an extremely cold winter. Kapaun would do all he could for the soldiers. He would wash their soiled clothes, retrieve fresh water, and attend to their wounds.

Fr. Kapaun would celebrate the sacraments for his fellow prisoners, hear their confessions, and say Mass. On Easter Sunday 1951, about two months before his death, he held a sunrise service for prisoners.

When he developed pneumonia and a blood clot in his leg, the chaplain was denied medical treatment, which led to his death. The whereabouts of his final resting place were, until last month, unknown.

For his bravery at Unsan, Kapaun was posthumously bestowed the Congressional Medal of Honor in a 2013 ceremony under President Barack Obama. The medal is the United States’ highest military award for bravery.