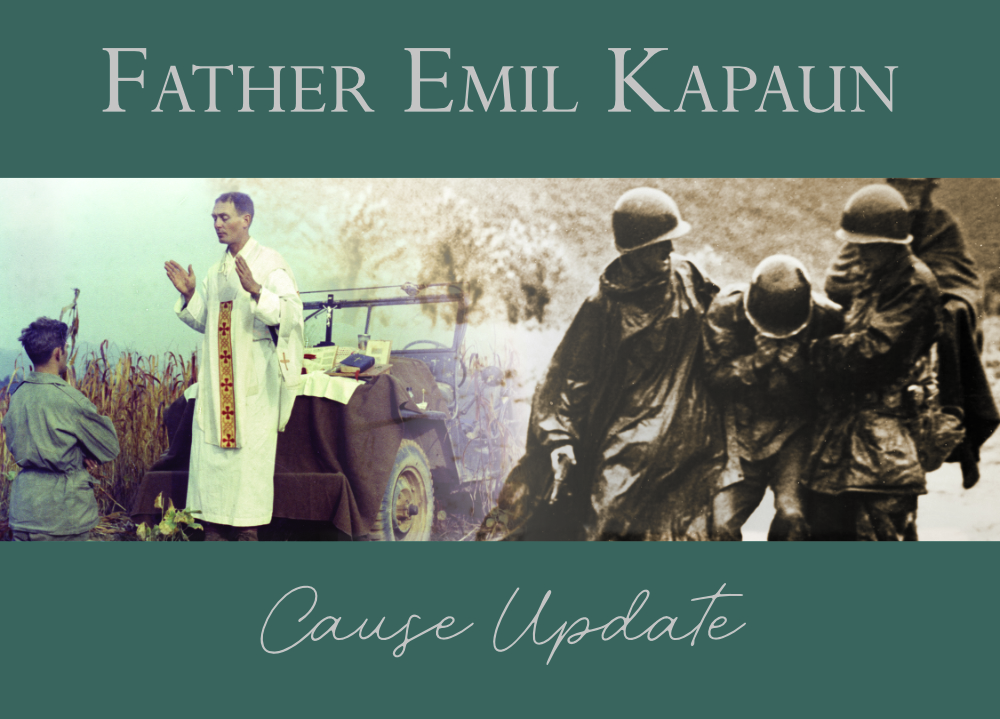 While there were a lot of challenging things in the world in 2020, it was quite the year for Father Kapaun’s supporters, with the identification of his remains in March, and his homecoming, funeral and interment in September.  We hope to have a video of the homecoming to share with you in the near future, and we hope you were already able to catch some of the news and photos on various outlets and social media channels.

In addition to Father’s body making its way back home, we finally have some updates to share about Father Kapaun’s cause for beatification and canonization.  The following is a letter from Father John Hotze, the Episcopal Delegate for Father Kapaun’s Cause here in the Diocese of Wichita.

Several things have transpired since you have heard from me, and I have waited to make sure everything is on track before I sent out information.

To start, our Postulator in Rome, Dr. Andrea Ambrosi has retired. We thank Dr. Ambrosi for getting us off the ground and a lot of good work underfoot, and wish him the best in retirment.

Our new postulator is Dr. Nicola Gori, who works for the Vatican Newspaper, L’Osservatore Romano.  He is a relatively new postulator, but his most recent work was on the cause for Carlo Acutis, who was beatified in 2020.  He is coming in with good fervor for Father Kapaun’s Cause, and I am happy with the effort he is putting in to learn Father Kapaun’s story and get right to work. He is able to use the information we presented to the Congregation for Saints previously, so he isn’t starting from scratch.

The Congregation for Saints has begun to return to work after the shutdown from the Covid Pandemic. The various Congregations have endured several shutdowns depending on the current Covid rates in Rome.  As you know, this slowed down Father Kapaun’s Cause, but we finally received some word on it.  After review and deliberation, the Congregation suggested that Father Kapaun’s Cause seemed to fit best into the new path to canonization called “The Offer of Life.” This procedure was put into place in 2017, two years after we presented the original Positio, to streamline the canonization process. Rather than proving that the Servant of God lived heroic virtue for the last 10 years of their life, this process focuses on the end of the candidate’s life, proving that he or she offered their life to God for the sake of others in imitation of Christ.  Several of the consultors and Bishops who make up the Congregation felt that this new path would be perfect for Father Kapaun and asked us to represent it under this category.  Dr. Gori felt confident that proving this would not be a problem.

Switching the focus of the canonization procedure also affords us the opportunity to offer any new evidence that has come to light since the close of the original investigation. With the identification of Father Kapaun’s remains, some additional testimony regarding the treatment of Catholic priests by the North Koreans and Chinese has arisen, as well as their role in hastening Father Kapaun’s death by not allowing other soldiers to feed him in the death house. While we had made an argument for Father Kapaun’s martyrdom when we submitted the original documentation, it wasn’t pursued at the time.  This information could help bolster the argument. I asked Dr. Gori to check with the Congregation to see if we can present more evidence for martyrdom, and he quickly received the consent of the Congregation in making this new push.

Dr. Gori and I are currently working to make this case.  If the Congregation approves Father’s martyrdom, he would be able to move directly to Blessed without the need to review any of the alleged miracles. Roy Wenzl and Travis Heying of the Eagle were of significant help in tracking down some of the new evidence from the DPAA which we will be presenting, so I am grateful for their efforts, as well as the testimony of Mike Dowe at Father Kapaun’s funeral, and the support so many of the faithful. We plan to present the case for martyrdom first and have the offer of life documentation ready if the Congregation still feels that is the best path.

Overall, I think it is good news that does Father Kapaun justice and could help speed the Cause up if approved. Please continue to keep the Cause in your prayers, as we can’t make progress without your continued efforts to pray and share his story.  We are edified by the number of lives that Father Kapaun’s story (and intercession) has touched, and the past year has only reinforced that fact.  Thank you for all you do.

Father Kapaun, Pray for Us!